One of our clients is undergoing a marketing renaissance of sorts. They have lots of paying customers, but wanted to bring in new prospects so they decided to turbocharge their outreach efforts. One piece of the overall marketing plan was to reach out to their contacts to invite them via email to meet a company representative at one of five upcoming industry events where they would be exhibiting.

But let’s face it, their email marketing database was a little stale. It had been well over a year since they had emailed anyone on their list. And as this recent blog post from OpenView Partners puts it so nicely, “CRM data is actually a perishable asset that, left unattended, can diminish in value and, ultimately, hurt your business more than it helps it.” In other words, they had no idea how many of those people were still at the same workplaces, if the email addresses were correct, or if they wanted to hear from this company.

One of the best ways to keep your email database up to date is simply to email people! If you do this at least once a year, you will pretty much know who has moved on to a different job (their email will bounce back), and at the same time remind your subscribers about your company and why they are on your distribution list. More often than once a year is preferable of course, but I would recommend once a year as a minimum. And how hard is that to do, anyway? Just send out a New Year’s greeting and you’ve got it covered. 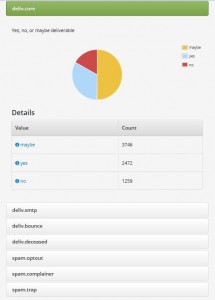 So, we could simply send them all an email in order to figure out which addresses work and which do not, but if there are too many bounces or unsubscribes, it may cause problems with the Email Service Provider (ESP) — in this case MailChimp.* ESPs maintain certain thresholds for bounces and unsubscribes in order to keep their delivery rates high. If a provider gets a reputation for hosting iffy senders (usually these would be considered spammers), many Internet Service Providers (ISPs) – the folks that actually deliver the email to people’s inboxes – will block their mail from reaching its destination. The ESP’s legitimate email sending clients will get blocked along with the malicious (or just poorly maintained) ones, so ESPs do their best to avoid exactly the type of list my client wanted to use.

We decided to run the email list through a data validation service, in this case we chose DataValidation, although there are other similar services like Briteverify and LeadSpend. For less than a penny an email address, DataValidation will comb through your list and rank each potential recipient according to several factors, such as if the person at that email address is a known complainer about spam, or if it’s a known spamtrap – a fake email address that goes right to the ISP’s anti-spam enforcement team, which can get you blacklisted or blocked. They also have some lists of deceased people, which you would probably want to remove from your list.

All in all, by running the list of over 7000 email addresses through the validating service, the list was broken down into 2472 yeses, 1259 no’s, and 3746 maybe’s. You can see the cool graph DataValidation creates with the results of its analysis (click the image to enlarge). The items below the graph can each be opened and investigated, and you can drill into the yes/no/maybe’s for further information.

Incidentally, one of the great things about DataValidation is that it fully integrates with MailChimp. Once you’ve run your list through them, you can simply hook it up to your MailChimp account, and it automatically unsubscribes the “no’s” from your list. Of course if you ever want to re-add any of the no’s, the fact that you unsubscribed them is a bit of a hurdle, but let’s leave that alone for now. If you’re nervous about letting your apps talk directly to each other, you can also download the full list and classifications from DataValidation, and then make the necessary changes in MailChimp by yourself. It’s more cumbersome and time consuming, but that’s the price you pay for having greater control. Doing it manually, you can simply delete the “no’s” rather than unsubscribe them, however if you have a very large list this could take you quite some time.

We promptly removed the no’s, felt immediately a lot more comfortable with the list, and were ready to hit “send.” Of course the company still had a sizable chunk of bounces and unsubscribes, but at least we were not emailing to known spam traps. And the company did not exceed MailChimp’s threshold for “bad” emails. In fact, the email blast had a 26% open rate, well over the 18% MailChimp indicated is the standard open rate for that industry.  So maybe the list wasn’t so stale after all…. 🙂

*Note that the link to MailChimp is an affiliate link. This means that if you click it and sign up for a paid MailChimp account, both The Lean Marketer and you will receive some free emails.