Where to Locate Your Startup’s US Operations

I had the pleasure of attending an entrepreneurs’ reception at the Technion last week co-hosted by the New York City Economic Development Corporation, in honor of the new and innovative Cornell NYC Tech Campus which will offer a joint masters degree between the Technion and Cornell. Mayor Michael Bloomberg has been proactive about drawing new industries to New York City to stimulate the economy.

But it’s not enough to create the new “Silicon Alley” for technology companies in the City (a misnomer since there are almost no alleys in NY, but I digress…). There needs to be a pool of talented and educated people for companies to hire into that new industry, hence the concept of building a new University from scratch, whose focus will be on technology degrees, and whose mission will be to bring industry and academia closer together through structured partnerships throughout the learning process. This new university located on Roosevelt Island is designed to play the same role to New York City that Stanford plays to Silicon Valley. 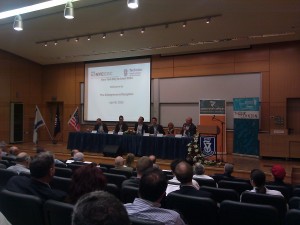 The event was full of the who’s who in Israeli high tech, including Yossi Vardi,  who moderated an interesting panel discussion that broke the confines of the stage to include members of the audience, including Uzia Galil, and Uzi Landau. The panel discussion included representatives from the new Cornell NYC Tech Campus, as well as VC representatives from Canaan Partners and DJF Gotham Ventures, and two high tech companies with NY operations, Kaltura and Medidata Solutions Worldwide.

One of the hot discussions – of course – was why startups should locate their US operations in New York, as opposed to Silicon Valley or anywhere else in the USA. Issues touched on by the panelists include:

Having worked for Israeli startups on both sides of the Atlantic, I would like to add two more, and in my opinion crucial elements: time zones and daily flights. Both of these have a huge impact on the ability to communicate often and productively between Israel (typically R&D) and the US (typically marketing & sales).

One of the biggest problems for Israeli companies when they set up their first US office is the feeling of disconnection from “the mother ship.” When you’re sitting in the US office you miss all the hallway banter, and don’t know what is happening in R&D, even though it may have enormous impact on the customers and prospects you are dealing with every day. Conversely, the people in Israel can go out to lunch completely oblivious to a major customer crisis that needs their attention. One of the best ways to overcome this type of disconnect is through regular phone calls, video chats, and of course, visits.

Scheduling calls around a seven-hour time difference (NY) rather than a ten-hour time difference (west coast) is a blessing. It is the difference between the Israeli side being able to start calls at 4pm (or 3 pm if the NYers get in a little early), as opposed to 7 pm. Having done the three-night-a-week 10pm conference calls (from the Israeli side), let me tell you, it not only sucks personally, it’s not conducive to productivity. And from the US side, when I was based in Fort Lee, NJ (right across the George Washington Bridge across from Manhattan), by the time I walked in on Monday morning, my Israeli counterparts were already well into their second workday of the week. I had to have a very clear agenda laid out or else I might find myself at the end of the Israeli workweek and still missing something I needed from our Israeli office. Most senior US-based executives of Israeli companies will find themselves working on Sundays for that very reason, at least enough to scratch out a to-do list, even if not making themselves available for conference calls. (Israelis might freak out about losing their one quiet day in the office if more Americans started calling them on Sundays 🙂

The daily flights are also important. Yes, El Al has a direct flight to LA which is one of my favorites. But it’s not every day (not Saturdays, for example), and once you arrive in LA, you still need a flight connection to San Francisco, and then a drive down to San Jose or wherever you’re going. New York is simple. You arrive from Tel Aviv to JFK or Newark, on El Al or Continental, and an hour or so later you’re wherever you need to be. No connecting flights necessary. You can, of course, connect through Europe, which also has its advantages. Honestly these daily direct flights was a key factors that helped us decide to open our office in NJ and not in Boston (which I was partial to).

Yes, I grew up on the east coast and spent eight years in the NY-NJ corridor, so I’m biased. But I’m also biased towards practicality, and the east coast is just more practical for Israeli companies. Agree? Disagree? Let me know in the comments.