Let’s Get Physical (as opposed to Digital)

I recently opened my own company, an important milestone marked by a lot of paperwork and meetings with people like lawyers, 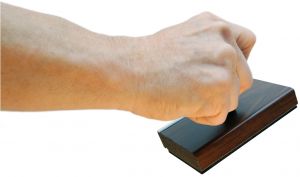 Interestingly, one of the most exciting moments of the process was ordering and receiving my company stamp. For someone who grew up and first worked in the United States, the business significance of a company stamp was lost on me, until it was explained by my attorney. The stamp – or company seal – together with an authorized signature, is the official signature of the company.  Even without knowing that, ordering the stamp, testing it out on some scrap paper, carrying it around in my bag just in case I needed to whip it out & stamp my company’s name on something – this all brought with it a frisson of excitement.

Most of my clients are startups, which means that many of the people I work with also recently opened their own companies. Everyone I spoke with about this agreed that there is something thrilling about the company stamp. One even volunteered what shape she chose and wanted to know what shape my stamp was.

My theory about this is that the stamp is practically the only three-dimensional physical symbol of having a company. The rest are all pieces of paper – most of which were emailed to me. In other words, digital communication. Not a physical item that you can hold in your hand, unless of course you print it. And frame it & put it on the wall.

So much of business these days is handled digitally. Meetings are done via Skype or Webex. Correspondence is emailed at the click of a button. Even industry events are, in many cases, being preempted by virtual trade shows.  While it’s possible to do business completely digitally, frictionlessly, and many of us do a lot of it, the physical encounters – either with each other or with objects that represent the other – become that much more powerful because of their rarity.

If you’re used to attending webinars and virtual trade shows, attending a real, physical trade show suddenly can seem revolutionary. All those potential customers, partners, competitors, journalists and analysts in one place! Amazing! Let’s drink beer and do some business together!

If you’re used to sending emails or making phone calls to your customers, imagine the delight when they receive good old-fashioned snail mail? In one company, one of our most successful door-opening campaigns ever was to send personalized notebooks to several hundred “tough nuts,” i.e. those prospects that never reply to emails and never ever seem to be in their offices when our salespeople called them. The kickass design and superior production quality of the books helped, but I tend to think that just the mere fact of sending a physical object, out of the blue, that had their name on it, was the main factor in our 25% successful response rate (actual meetings!) that this campaign achieved.

Getting actual human beings into a room to talk with each other can lead to amazing things. Sharing physical objects is the next best thing. Lots of startups skimp on givaways (“Don’t people just throw those away or give them to their kids?” – I can’t count how many times I’ve heard that), but if you can find something that really represents your company, either symbolizes the product, the product’s benefits,  or even just your company’s fun-loving culture, givaways can have a strong impact. In fact, the fancy pen I’m using to write my notes this week is one given to me by my bank, when I opened my business account.

Bottom line? It’s OK to do almost everything digitally.  But don’t forget the power of the physical. The handshake. Looking someone in the eye. The physical gift that stays long after the meeting is over.