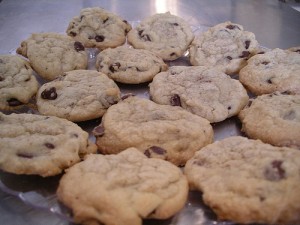 The marketing aspect of a product launch has lots of moving parts. And if you are a small company, some or most of those parts may be outsourced, since you probably don’t have a whole lot of extra marketing staff lying around waiting for the big burst of activity that a launch entails.

So this is the situation I found myself in recently, with one of my clients a month or so ago. They have a launch coming up in October, timed to coincide with an industry event focused on their target market.

Like the organized executive she is, the VP marketing started us off by working on a launch plan. I wrote up the plan in a Word document to make sure we were all on the same page. She then took it upon herself to translate this into a gantt chart and budget, in order to manage the project effectively.

Makes sense, right? Except that that there are times when figuring out all the details in advance just delays your start time.

Think of it like a recipe. I baked a lot this summer with one of my kids since he received a box of dessert recipes and wanted to test out the top priority ones (i.e. anything with chocolate, peanut butter or whipped cream). We made a point of reviewing each card before we started to make sure we had all the ingredients and pre-heated the oven properly.

But if you had asked me if the recipe called for 1/4 teaspoon of vanilla extract or 1/2 teaspoon, I would not have known the answer. I get starting knowing just enough to start — with a general idea of what will follow and full awareness of end goal — and then fill in the details as I go along. This is not a cooking show where the eggs are pre-cracked in a glass bowl, just waiting for me to toss them into the mixing bowl. This is a regular kitchen where we pull stuff out of the cabinet or fridge as we need it, and make substitutions or additions out of necessity or desire (as in, “this would taste better with chocolate chips, don’t you think?”).

Just as there is no need to measure out the vanilla at the start of the cookie-baking, there is no need to fill in every detail of the gantt chart before starting the launch process. Over the course of the weeks leading up to the actual launch, things will change, and believe me, they have. Guest blog posts we thought we’d get to write in September came through in August; early product interest from prospects provided amazing testimonials for the marketing materials; research for a thought leadership content piece turned out to be more complicated than we expected.

I’m not suggesting that you don’t plan. In fact, planning is an extremely important part of any marketing campaign. I am just saying that you don’t need to nail down your plan to the level of exactly how many chocolate sprinkles to put on each cupcake, since you might decide at the last minute to top them with chopped nuts instead.

Lean Startup methodology calls for developing a  “minimum viable product” which means to get the product out the door and into customers’ hands as quickly as possible, with minimum features, in order to start gathering feedback that can be incorporated into the next version. I recommend approaching marketing launches similarly, in other words, plan, but most importantly start doing stuff.  Keep your plans open enough that they can accommodate changes along the way, for the good and the bad. But just get started.