Home » The Lean Marketer Blog » The Road Not Taken

The Road Not Taken 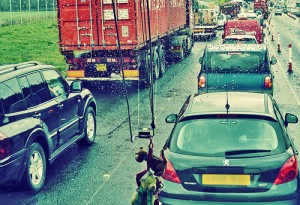 We are constantly faced with decisions in business and in life. It’s rare to have the opportunity to observe, in real time, what deciding differently would have led to. I had just such an opportunity last week, and had plenty of time to think about where I’d gone wrong, and how I would apply this as a business lesson – you’ll see why in a minute.

I was planning to attend a  meeting of women startup founders together with my friend and fellow marketer Rebecca Rachmany.  We intended to drive into Tel Aviv together from our suburban hometown of Hod Hasharon, thus having the dual benefit of saving gas and having an hour to gab. When we awoke that morning to “geshempocolypse*,” aka extremely stormy weather, we were of two minds – literally – about what to do.

We both checked weather and traffic reports, and all routes seemed terrible, including the train, which often gets flooded and delayed in even less extreme weather. In the end, I decided to drive, and Rebecca R decided to take the train, which meant for her, a brisk, wet walk to the train station, followed by a taxi from the Tel Aviv train station to the meeting. We stayed in touch on and off during our multi-hour adventure, me in my car and her on foot or rail. Needless to say, she got there, and I didn’t. I was never able to reach the meeting (which got cancelled due to inclement weather, although the organizer met Rebecca for a one-on-one). She got there not by train + taxi, but by train + walking, in the rain, through pure, unfettered ambition to get where she was going; there were no taxis to be found, and even if there had been, there was nowhere for them to drive, since the roads from the train station were backed up in every direction.

Once I realized about an hour into my drive that I wasn’t going to reach my destination (radio reported that the major Ayalon artery was closed due to flooding, and traffic was backed up all around Tel Aviv for miles – no one was getting anywhere), I decided to turn back home, but getting there took another hour and 15 minutes because I was already on the highway and couldn’t get off. I could have stressed out about all the work I wasn’t getting done while I sat in traffic, but I actually had quite a lot of time to think about this blog post and other aspects of my business. How often do you have over an hour to just sit and think, all by yourself, with no (well, few) interruptions? If you are like me, it’s not very often.

A few metaphorical lessons learned through this experience:

As soon as you instinctively know you’ve made the wrong decision, turn back (look for objective evidence of course, but listen to that inner voice – it usually knows better). I had ample opportunity not  to get on the highway in the first place. I had to wait to get onto the on ramp for over half an hour, and as I did that, I could see that the traffic on the highway was going nowhere fast. How stupid was it of me not to cut out of that line and turn around? Pretty stupid. In your business activities, often there are signs that you’ve taken the wrong path, but your wishful thinking tries to wish it away. Stop wishing, start listening to your smarter self, and get out while you still can.

Even experts sometimes get it wrong. I am addicted to Waze, the social GPS. It saves me time by routing me around traffic jams, notifies me if there are police or hazards ahead, and even comps me to coupons. In this storm, Waze kept assuring me I was just 45 minutes from my destination. Even once I decided to turn around, Waze gave me bad directional advice, and it wasn’t until I ignored it completely that I finally was able to get past the traffic, off the highway, and back home in what felt like no time at all (I was moving!). You probably have some esteemed advisers and analysts you are used to listening to all the time to help you make decisions about your business. Listen to them most of the time. But when their advice doesn’t compute, remember that you’re the one in the driver’s seat, and you are the one who has to live with the consequences, so you are the one who gets to make the decision.

Sometimes the hard way really is the way to go. I am awed that Rebecca R. not only made it into Tel Aviv, but used actual shoe leather to get from the train station to the Tel Aviv Port, a distance of nearly 4 km, in the pouring rain. And she made it faster than any car – I know this because the cars on Rokach Boulevard were basically standing still. The only way she could have arrived any faster (or dryer) would have been by helicopter. Sometimes when you’re moving your business forward, the right way just seems too hard to be true. There must be an easier way, you think to yourself. Guess what – a lot of things are hard, and time consuming, and repetitive, and they still need to be done in order to accomplish your business goals. Persistence, more than almost anything else, can lead to success.

Make the best of the wrong decision. I knew I’d made a mistake (actually a series of them), but decided consciously not to get upset about it. Why waste the energy? The traffic was moving slowly enough (read: not moving at all) to check email periodically. I was able to make a few phone calls. And as I mentioned, do a lot of thinking, which I hardly ever give myself the time to do. It may not have been the way I had planned to use my morning hours, but it was not a complete waste. Your mistakes are never a waste if you can turn them into something you’d never considered. And of course, you learn from them, and do better next time.

Timing is everything. And sometimes you need a little luck. The very next day, I had another important meeting in Tel Aviv. This one was a medical test for my mother that had been scheduled weeks before, and if we cancelled it (or missed it due to road conditions) it would take weeks and huge amounts of hassle to get another appointment. Even though horrible weather was expected for the rest of the week, I decided not to cancel the appointment – crazy? maybe, maybe not. The Ayalon had already been re-opened that night, so things were looking up. I decided I would get up early, listen to the reports, and then decide. Everyone I spoke with told me to forget it, don’t even get into the car tomorrow. As it happened, the rain let up the next morning and there were intermittent blue skies. People had been so burned by the previous day that the roads were empty. We reached the clinic with time to spare. And we were back home, safe, sound and dry, in record time. Smart? Maybe not. Lucky? Yes, very. And a little luck never hurt anybody.

Few of us are so blessed that we have never made a mistake.  The lessons from this particular mistake – a drive to nowhere in the rain – are applicable to many business decisions; when and who to hire, what direction to take the product, what market segment to target since you think it will move the quickest, where to advertise, if you should go to that big industry event, and the list goes on.

Every decision has an opportunity cost, or as Robert Frost put it so eloquently, a road not taken. Just don’t beat yourself up for taking one road or another. If you don’t decide and go down one road or another, your business will never get anywhere.

Image credit: “Nowhere Fast” by Flickr user  delphwynd (I tried to find a great picture of the Israeli traffic but all I found were pictures of snow and the grubby, flooded Ayalon. This picture at least showed the type of situation I was in, even though it wasn’t photographed in Israel. Plus the colors are great.)